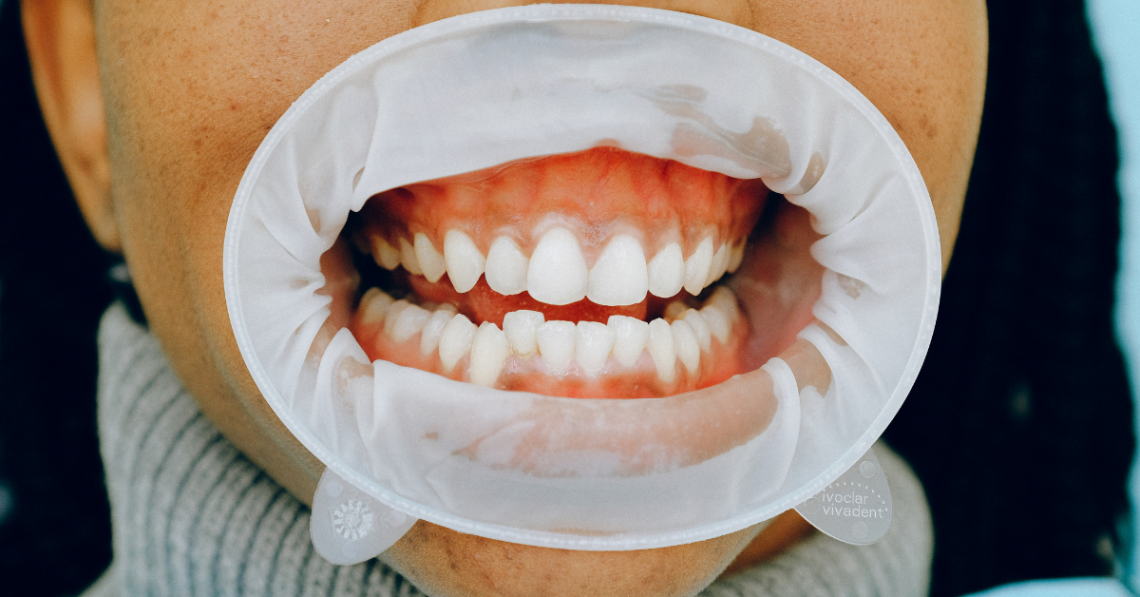 Sometimes, a person could have the best oral hygiene and still get pale gums. Healthy gums should be a consistent shade of pink, and they may appear lighter around the perimeters of your teeth and darker around the sides of your mouth. The gums of one person may be naturally whiter or darker than the gums of another, but it’s not normal to have pale ones.

Although there could be other reasons, some of the most common causes for pale gums include:

Although gum color typically varies from person to person, it shouldn’t be too pale. So, to make it easier on your end, we’ve come up with a detailed list of what could be the culprit of your pale gums.

What are the Causes of Pale Gums?

Gums vary in color, but they typically stay within the range of pink. Anything lighter might mean that you have one of the following conditions.

Due to oral leukoplakia, the gums can acquire homogeneous, thin, white patches. Regular gum or mucous tissues alternate with or are bordered by these. The white areas may be mottled with red or contain elevated white nodules.

Patches of leukoplakia can appear anywhere in the mouth and cannot be massaged or scraped away. The exact cause of this ailment is unknown. However, it seems more common in those who smoke, drink heavily, or have poor dental hygiene. Leukoplakia patches are usually harmless, and they can change and become malignant.

Anyone who notices these patches should consult a physician or a dentist. Your physician may choose to monitor leukoplakia patches or surgically remove them depending on the size and location of the patches and individual risk factors such as smoking.

Pale gums are often one of the signs of anemia. When the body does not receive enough oxygen-rich blood, anemia develops. Some tissues might become pale due to a lack of blood. A person with anemia may experience the following symptoms in addition to pale gums:

A deficiency in iron, folate, or vitamin B-12 causes anemia. Otherwise, a person may have insufficient blood cells or hemoglobin. People with anemia typically have irregularly-shaped blood cells. Similar to most medical illnesses, there are a variety of medical disorders that cause anemia.

Certain drugs, especially those used for chemotherapy, can make a person more susceptible to anemia. Others get it after using too many nonsteroidal anti-inflammatory medicines (NSAIDs), which cause internal bleeding. However, it may be as simple as taking iron supplements for at least six months to treat the condition.

The ideal way to take these pills is with food and citrus liquids, mainly orange juice. In addition, iron-rich meals can aid, such as dark leafy greens, fortified cereals, and bread.

When anemia stems from extremely heavy periods, a person may benefit from hormone drugs that lighten menstruation. In addition, certain meals can obstruct iron absorption in the body. If you have anemia, you should avoid alcohol, coffee, tea, dairy, and whole-grain products.

Hormonal fluctuations can result in pale or bleeding gums. The hormonal changes linked with menopause reduce blood flow, resulting in pale and dry gums. Menopausal gingivostomatitis is an infection that causes pale, dry, and bleeding gums. Hormone therapy can help with these issues.

A coating of web-like, slightly elevated white threads develop throughout the gums’ mucus membranes in a person with oral lichen planus. To rule out other medical conditions, a doctor would usually take a biopsy, or a small sample of tissue from the affected areas, to diagnose this illness.

Oral lichen planus has no cure, so treatment focuses on reducing the number of flare-ups and the severity of symptoms. Managing the illness can be as simple as eating a healthy, balanced diet, staying hydrated, exercising, and quitting smoking.

Vitamin K aids in blood clotting, and those who do not get enough of it may experience prolonged bleeding. In addition, it causes symptoms that are comparable to anemia, such as pale gums. Vitamin K injections, which are typically given shortly after birth, are easy to address this disease.

Mouth ulcers, also known as canker sores, occur in the mouth and gums. They can be highly uncomfortable, mainly when speaking, eating, or drinking. Ulcers are usually round or oval, with a pale core and a crimson border. Canker sores on the gums can cause the gum line to appear white in some spots. However, they do not modify the color of the gums throughout the mouth.

Gingivitis is a common gum disease that you should take seriously. If not treated properly, it can worsen a condition: Periodontitis. This prevalent ailment affects around half of all individuals in the United States. Poor oral hygiene is the most common cause of gingivitis.

Gums around the base of the teeth may become inflamed, red, and swollen in people with gingivitis. When brushing and flossing, they may notice loose teeth or bleeding. In addition, the illness can cause the gums to turn white and recede over time.

Should I Be Worried If My Gums Are White?

White gums frequently indicate something is wrong with a person’s dental health. White gums are due to various disorders, ranging from simple canker sores to long-term inflammatory illnesses. In addition, white gums can suggest oral cancer in rare situations. Therefore it’s essential to contact a doctor for a precise diagnosis.

Tips For Taking Care Of Your Gums

Gums hold the entire teeth. Thus, we must pay ‘extra’ attention and take care of it. Aside from brushing your teeth, here are some tips for taking care of your gums.

Never skip flossing your teeth. The American Dental Association claims that this helps eliminate plaque and food that your toothbrush can’t reach. However, it makes no difference when you floss, and it doesn’t matter if you do it at night, in the morning, or after lunch, as long as you religiously do it.

If you visit your dentist regularly, they will be able to spot early signs of gum disease. As a result, you can dodge a downward spiral situation concerning your gums. A professional cleaning may only remove tartar. However, it can help remove any plaque you may have missed while brushing or flossing. Rest assured that brushing, flossing, and frequent dental cleanings can help you reverse gingivitis.

Another incentive for smokers to give up is that smoking is a common cause of the development of gum disease. Because smoking affects your immune system, it makes fighting off a gum infection more difficult. Furthermore, smoking makes it more difficult for your injured gums to heal.

Consider using an electric or battery-powered toothbrush. These tools are more effective than traditional toothbrushes when reducing gingivitis and plaque. However, you should know that it’s crucial to replace brushes or toothbrush heads after three to four months of use.

Many options claim to alleviate gingivitis, freshen breath, and whiten teeth in toothpaste. So how can you know which is the best for keeping your gums healthy? First, make sure you purchase fluoride-containing toothpaste paired with ADA’s seal of approval. Following that, it would be up to you to decide on the flavor and color.

Tip #6 – Use a Therapeutic Mouthwash

Therapeutic mouthwashes are usually available over the counter. These can help:

A rinse also helps eliminate food particles and debris from your mouth. However, it isn’t a replacement for flossing or brushing. Look for the ADA seal, which indicates that the product is effective and safe.

Care For Your Pale Gums

Gum color naturally differs from person to person. Consult a doctor or dentist if your gums appear paler than usual to rule out anemia and other underlying disorders. Likewise, anyone who feels abnormal growths are causing their gums to seem lighter than usual should consult a doctor.

A doctor or dentist will determine the cause of white spots on the gums via checking your medical history, taking a visual examination, blood tests, and biopsy. In addition, a clinician may take a small tissue sample from an oral lesion to diagnose oral lichen planus to check for malignant or precancerous cells. These are often associated with leukoplakia.

If you have other dental concerns, you can count on us to assist you. In addition, we have other blogs that can make it easier to understand everything about the oral cavity.

Dr. Marisa Walker provides comprehensive preventive and restorative dentistry for children and adults. We provide personalized care and attention to ensure that each patient has the best possible experience and outcomes.

Our mission is to provide exceptional dental care centered around our patients’ comfort, needs and goals. Every aspect of our practice is tailored to placing our patients’ health and comfort first.

Is Always A Priority With Us

Don't Take Our Word For It, Our Satisfied Clients Say It All

Check out the testimonials from our happy customers below